Van Gogh Museum (Amsterdam) Has the largest single collection of works by the Dutch painter Vincent van Gogh, and his contemporaries. The National Archaeological Museum (Athens) Has the world’s richest collection of artifacts and antiquities from Ancient Greece, including prehistoric Cycladic, and Mycenaean items, ancient Greek sculpture (statues and reliefs) and pottery, the Stathatos Collection, the Vlastos Collection, and an assembly of Egyptian artifacts.

Picasso Museum (Barcelona) Established by Jamie Sabartes and opened in 1963, it houses some 3,500 items by the 20th century Spanish artist Pablo Picasso, including works from his "Blue", "Rose", "African" and Cubist periods.

Guggenheim Berlin Designed by Richard Gluckman and opened in 1997, it is small gallery of avant-garde art in Berlin’s Unter den Linden area, jointly owned by Deutsche Bank and the Solomon R Guggenheim Foundation.

Guggenheim Bilbao Designed by the Canadian-American architect Frank Gehry, the museum opened in 1997 to promote avant-garde works through permanent and temporary exhibits by top contemporary artists, from Spain and overseas. Musee Conde Chantilly One of the best art museums in Europe, the Musee Conde (housed in the Chateau de Chantilly) is one of the finest galleries of medieval art in France. Its collection features French paintings and book illuminations of the 14th, 15th and 16th centuries, as well as many Old Masters from the Renaissance, Baroque and Rococo eras. The library holds some 1300 manuscripts and 12,500 printed volumes, including a Gutenberg Bible, and some 200 medieval manuscripts. Highlights include the Registrum Gregorii (983), the famous Les Tres Riches Heures du Duc de Berry and miniatures from the Book of Hours of Etienne Chevalier, by Jean Fouquet.

Gemaldegalerie Alte Meister Dresden One of ten venues which make up the Staatliche Kunstsammlungen Dresden (State Art Collections), its collection features 700 masterpieces of fine art painting from the 15th to the 18th century, such as the Sistine Madonna by Raphael; The Tribute Money by Titian; and Girl Reading a Letter at an Open Window by Vermeer. Chester Beatty Library (Dublin) One of the finest compact art museums in Europe, opened in 1950, it houses the collection of Sir Alfred Chester Beatty, of rare manuscripts, drawings, miniature painting, prints and decorative arts exemplifying the great cultures of the world.

Trinity College Dublin Library Holds a unique collection of rare manuscripts including the Book of Kells (800).

National Gallery of Scotland (Edinburgh) Opened in 1859, the museum is the national gallery of Scotland. Masterpieces on display include: Virgin Adoring the Sleeping Christ Child by Sandro Botticelli, Dedham Vale by Constable, The Hon. Mrs Graham by Thomas Gainsborough, The Vision after the Sermon by Paul Gauguin, a series of works by JMW Turner, among many others. Pitti Palace Florence (Palazzo Pitti) The palazzo – known as the Pitti Palace – is a substantial Renaissance palace situated on the south bank of the River Arno, close to the Ponte Vecchio. Now the largest museum complex in Florence, its Palatine Gallery contains more than 500 mostly Early and High Renaissance paintings, which originally belonged to the Medici family collection. Includes masterpieces by Raphael, Titian, Perugino, Correggio, Rubens, and Pietro da Cortona. The Pitti Palace is one of the greatest Renaissance museums in Europe.

Uffizi Gallery (Florence) One of Europe’s oldest and greatest art museums, it has the world’s finest collection of Italian Renaissance art.

Stadelsches Kunstinstitut und Stadtische Galerie (Frankfurt) Founded in 1818, the museum owns 2,700 paintings, plus 100,000 drawings, prints and other works on paper, and over 500 sculptures. 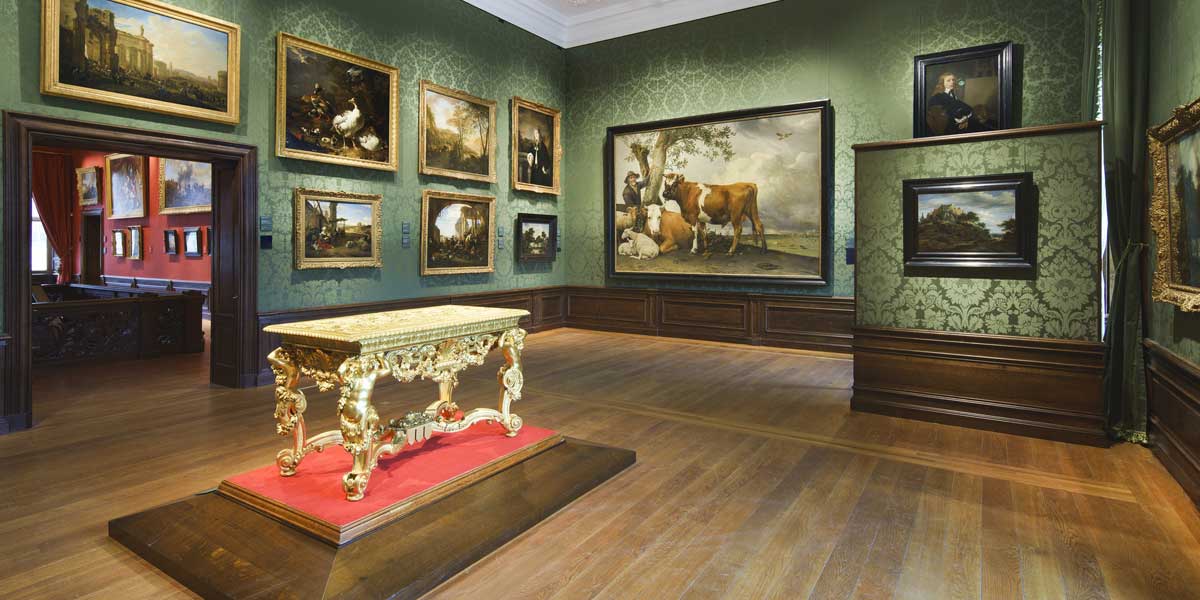 Czartoryski Museum (Krakow) Founded in 1796 by Princess Izabela Czartoryska, it contains Lady with an Ermine, by Leonardo da Vinci, Portrait of a Young Man by Raphael (later stolen). Other highlights include Greek vases, Roman and Egyptian antiquities, and Limoges enamels.

Palais des Beaux-Arts (Lille) Founded in 1809, with the second largest art collection in France after the Louvre. It contains Antiquities, Gothic, Renaissance and Baroque art, as well as modern and contemporary painting and sculpture. British Museum Established in 1753, it is one of the most comprehensive art museums in the world. Its permanent collection consists of more than 8 million antiquities and cultural art objects.

Houses the British state collection of paintings and sculptures produced before 1900.

British Royal Collection One of the best private art museums in Europe, this collection, amassed by the Kings and Queens of England, contains almost 50,000 paintings and drawings, together with 150,000 old master prints.

Victoria and Albert Museum (London) Has the world’s most extensive collection of decorative art and design. The brainchild of Prince Albert, husband of Queen Victoria. Thyssen Museum Has an important collection of 14th-Century and 15th-Century Italian paintings by Duccio di Buoninsegna and his contemporaries, as well as Netherlandish Renaissance painters. Baroque and late-19th early 20th-Century styles are also featured.

Pushkin Museum of Fine Arts (Moscow) Organized by Ivan Vladimirovich Tsvetaev and opened in 1912, this is the largest Moscow collection of European fine art. It contains works by Impressionist and Post-Impressionist artists, including Van Gogh, Gauguin, Picasso, and Matisse.

Pinakothek Munich One of the best art museums in Europe, the complex comprises three major art galleries in Munich’s Kunstareal: The Alte Pinakothek (Old Masters to 1700), The Neue Pinakothek (1700-1900), and The Pinakothek der Moderne (20th Century). Ashmolean Museum of Art and Archeology (Oxford) The world’s first university museum, dating from 1678, its highlights include: Hunt in the Forest (1470) by Paolo Uccello, drawings by Leonardo da Vinci, Raphael and Michelangelo, Watercolours by Turner, The Arthur Evans Minoan collection of antiquities, and much more. Louvre (Paris) The greatest art museum in Europe, it possesses one of the world’s greatest collections of ancient, classical, Renaissance and French art.

Musee de l’Orangerie (Paris) Located on the bank of the Seine in the old orangery of the Tuileries Palace on the Place de la Concorde, it specializes in Impressionist and Post-Impressionist paintings. (Since 1965, it has been the home of the famous collection of the late Paul Guillaume.) Artists represented mostly include members of the Ecole de Paris, like Cezanne, Matisse, Modigliani, Monet (Nympheas, 1920-26), Picasso, Renoir, Henri ‘Le Douannier’ Rousseau, Chaim Soutine, Sisley and Utrillo, and others.

Musee Marmottan Monet (Paris) Situated in the XVIe arrondissement, its collection includes the world’s largest holding of paintings by Claude Monet, plus works by other Impressionist and Post-Impressionist painters including, Morisot, Degas, Manet, Sisley, Pissarro, Gauguin, Paul Signac and Renoir. It also holds the Wildenstein Collection of illuminated manuscripts.

Musee d’Orsay (Paris) Arguably the best museum of 19th century French art in Europe, with the finest collection of masterpieces by French Impressionist and Post-Impressionist painters.

Pompidou Centre (Paris) Known for its world famous collection of 20th century avant-garde works, it is one of the best galleries of contemporary art in Europe.

Narodni Galerie (Prague) The Czech National Art museum includes a wide range of fine art by Czech painters and sculptors, as well as Western paintings by Albrecht Durer and others. Borghese Gallery (Rome) Contains a significant part of the Borghese collection of Classical Antiquities, paintings, and sculptures, assembled by Cardinal Scipione Borghese, the nephew of Pope Paul V (1605–1621). Highlights include paintings by Caravaggio and sculptures by Bernini.

Vatican Museums One of the best art museums in Europe, it houses the priceless collection of painting, Italian Renaissance sculpture and antiquities assembled over the centuries by the Catholic Church.

Nationalmuseum (Stockholm) Founded in 1792, its collection includes 500,000 drawings from the Middle Ages to 1900, along with a variety of porcelain, painting and sculpture.

Hermitage State Museum (St Petersburg) Founded by Catherine the Great, the Hermitage is one of the world’s largest art museums. Peggy Guggenheim Museum, Venice Founded by Peggy Guggenheim, it is famous for its collection of 20th century modernism, featuring works of Cubism, Surrealism and Abstract Expressionism.